Keisei 'Limited Express' - What is it?

keisei Electric Railway Co., Ltd. offers a reasonable and moderately fast way from Narita Airport to Tokyo - Keisei 'Limited Express'. Its price could hardly be beaten - 1,100 ～ 1,240 yen to Asakusa or Ueno. If you are a backpacker and planning to stay in Asakusa, this is probably the best choice. All seats are free, but you can easily get a seat because but Narita Airport is the starting station.

Rush hour? Don't worry. Narita Airport is the first station, so usually it is easy to have a seat.

For more luxurious travel, Keisei's Skyliner is 'another' kind of 'Limited Express' offered for an extra fee. It is faster and more comfortable with compulsory seat reservation. Free WiFi is also available on board. Its maximun speed is 160 km/h and stops at only four stations: As you can see, Skyliner stops nowhere between the airport and the Yamanote Line circle.
Nippori and Ueno are both on the Yamanote Line circle and just a few minutes from each other.

Apart from the prices, the most important difference between the two types of Limited Express trains is that Skyliner goes only to Ueno station, while other limited express trains operate direcctly to varying destinations including Ueno, Asakusa, Shimbashi, Shinagawa and Yokohama.

Getting straight to Ueno is not bad at all. Nippori and Ueno are on the circular Yamanote Line which connects most of major train stations of Tokyo, including Tokyo, Akihabara, Shimbashi, Shinagawa, Shibuya, Harajuku, Shinjuku, Ikebukuro and so on.
If your destination is Asakusa, take a Ginza Line of Tokyo Metro, from Ueno station. It takes 5 minutes and 170 yen. And if you prefer to take a taxi, nothing is easier than catching a taxi in front of Ueno station.

'Ordinary' limited express trains - i.e. not Skyliners - are directly connected through Toei Asakusa subway and Keikyu Line trains, just like a single line. For example, on weekdays a limited express train leaves Narita Airport at 16:04 and arrives at Yokohama station at 17:54. For this train you don't even need to transfer. By the way, the price for this ticket is 1,690 yen. But this kind of direct train doesn't run very often, so if you are going to Shimbashi, Yokohama or Yokosuka, just go to Takasago or Aoto station and then hop on another train in your direction.

Some trains even go directly through rails of Toei Asakusa Line and Keikyu Line. If you choose those trains, you can get to Shimbashi, Shinagawa, Haneda-Airport, and Yokohama without transfer, or an easy transfer on the same platform.


Time and Ticket Prices to Major Destinations by Keisei Trains

The following is a list of ticket prices to major destinations from Narita airport (April 2019):
You can find discount tickets for Skyliner at Keisei's official website in English: http://www.keisei.co.jp/keisei/tetudou/skyliner/us/index.php

Nothing is more useful than a PASMO or SUICA (prepaid IC card) for getting around in Tokyo.
With 'PASMO' IC card, you can skip all the price calculations, and just touch the gates with you card. You can get a full refund of the 500 yen deposit and remaining balance at train or metro stations where a PASMO is sold. (All metro stations sell PASMO, too.) You can ride trains and buses using an IC card called PASMO. You can buy a PASMO card at Keisei train station of Narita Airport, too. PASMO is functionally identical to SUICA which issued only by JR. You can ride almost any JR train with a PASMO, too (except for Shinkansen). You can use PASMO at most shops and restaurants and vending machines at, but not limited to, train or metro stations. For details, see:
How to buy and use PASMO & SUICA

The sign board contains almost all information you need except for prices:
First, choose a train, and then buy a ticket. Buying and using an IC card called PASMO is much easier, faster and more flexible than using paper tickets. For more details on PASMO see SUICA and PASMO.
Skyliner needs an add-on ticket which you can buy from the ticket machine, from a counter near the panel (blue-colored corner counter on the photo) or online with some discount. You can ride all other Keisei trains with no additional fares, just going through the gate with your PASMO or a paper ticket for base fare. 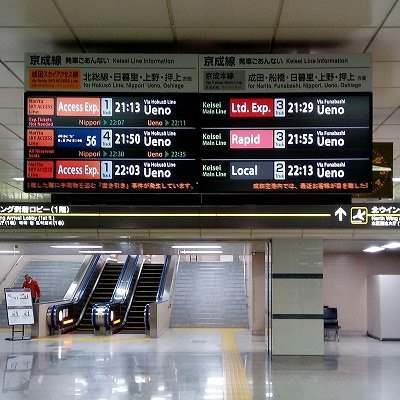 Locate the Keisei Line Ticket counter. You can see the gate ahead, and ticket machines around it.
If you want a Skyliner add-on ticket, buy it here from the staff. They 'probably' speak English. Good luck. 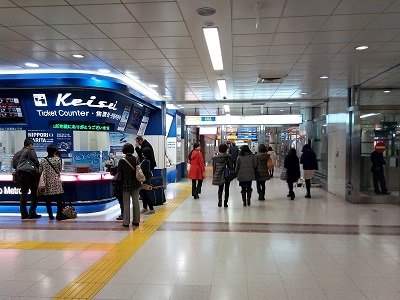 Buying a PASMO or a paper ticket from a ticket machine

The ticket machine is next to the information counter.
The big panel above shows the ticket prices for each destination. If you are going to buy a PASMO, don't worry too much. But if you want to use a paper ticket, you need to know the exact price. Ask staff if you are unsure. 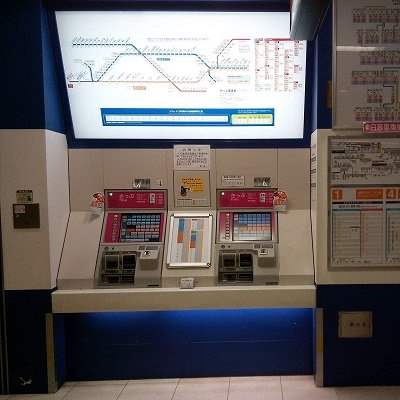 You can buy a PASMO or a paper ticket as follows:
On the touch screen,
1. Select "English" on top screen. The following screen appears. Then select "PASMO" on the leftmost column.
Or you can also buy a paper ticket now, but it is a bit more difficut - here is how:
(If you want to buy a PASMO, skip the following #1, #2 and proceed to the next section. Don't worry, it won't take much time.)

#1: Press a button according to your route and price:
#2: Insert cash. Get your ticket and changes. That's it! 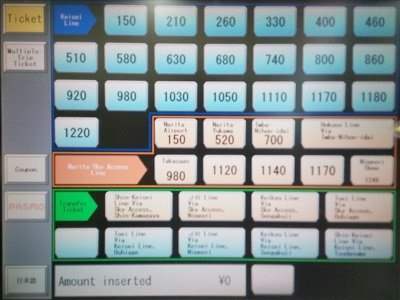 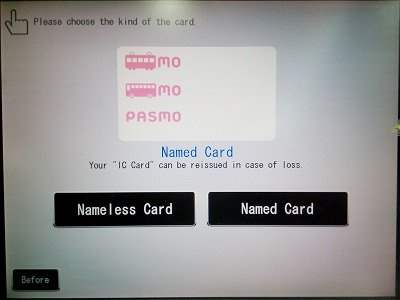 3. Select initial amount including deposit. The price includes 500 yen deposit. If you are not sure how much amount you want, buy a card for 3000 yen (500 deposit + 2500 ticket). It will be enough for going to almost anywhere in metropolitan Tokyo (Ueno, Shinjuku, Shinagawa, Ikebukuro, Yokohama, etc.) The deposit and the remaining amount fully refundable at any time without any fees, at almost any train station where PASMOs are sold. It is a good idea to have some extra amount of deposit, because you can use pasmo at almost all kiosks, cafes, restaurants, vending machines (when you are thirsty, you can buy a bottle of water with PASMO), almost all convenience stores including Seven Eleven, Lawson and Family Mart, and many more shops and cafes. PASMO is totally compatible with SUICA which is issued only by JR, so you will not need both.
After you press a price button, the machine prompts you to insert money. Don't forget to take your PASMO and changes. OK, you've got your PASMO? Now you can go to the gate! 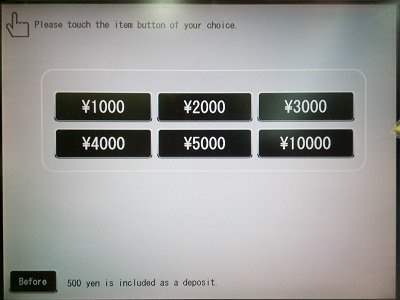 Going to the gate

Proceed to the gate. 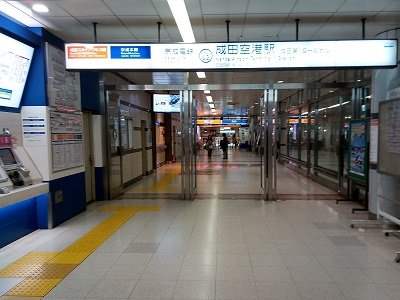 Now you are at the gate. 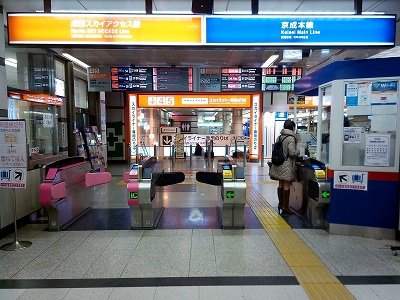 Going through the gate to the platform 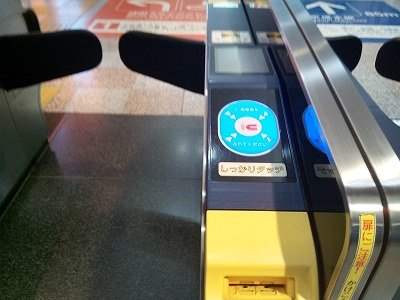 Follow the signs and proceed to your track. Depending on the type of your train, you may have to go through another gate, using your PASMO or paper ticket again. In particular, Skyliner tracks can be reached only through that additional gate. You can ride any limited express Keisei train just with you PASMO, unless that train is a 'Skyliner' or some other 'Liner' which requires additional seat reservation. 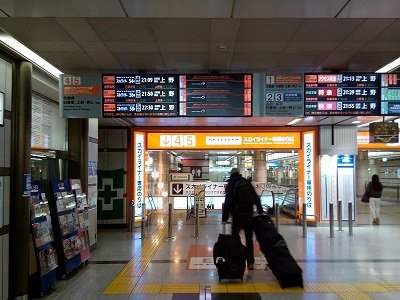 You can find links to Keisei Line timetables in English here.